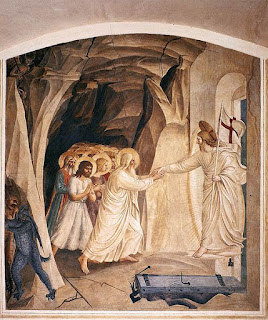 There is another shrine which the devout lover of S. Antonino finds perhaps more appropriate and more touching — his cell in S. Marco. Here within these walls, how much of that character was built up which has made him revered in Florence, as the most blessed of her Bishops for over a thousand years! We look round with affection and love to think how much it meant, when in those far-off days (which somehow here seem not quite so distant) the vigorous Prior wrought out so many plans for the well-being of his brethren and the city. In it are gathered now his vestments, the death-mask, some manuscripts (which it requires a persistent visitor to get hold of) in his execrable hand- writing, and an old portrait. . . .

But in this "narrow cell" that S. Antonino had chosen for himself, Fra Angelico has painted a fresco. Its design was no doubt thought out by the friends in counsel; and the Prior must have stood and watched while the artist-friar in prayer worked out with his bright colouring the mystery that both deemed the most appropriate. It represents the descent of Christ to the departed in Limbo. The figure of the Crucified Saviour, who has not yet burst through the portals of the tomb, stands in soft mellow light at the entrance of a rocky cave. In front and to the right stretch the long line of figures whose eyes gaze in rapt ineffable adoration on the face that lit up for them the gloom alike of life and of death. Thronging together, their hands uplifted in wonder, their knees half-bowed in worship, they stand for thousands and tens of thousands out of many nations and centuries and beliefs. Gathered from Earth's wide-stretching garden, they are the first blossoms that Christ shall offer to His Father; and over them all broods a hushed, yet living, silence. They are the spirits of the just made perfect, the first-fruits of the Lamb, the eldest-born of all the Dead. How they had waited in patience shut up within their prison, while through timeless aeons they looked out for the Messias! Tired were they and weary, expectant of release, yet knowing not day nor hour when the fulness of time should come. In silence and in hope was their only and utter strength. So Christ would have them remain until He should come.

And S. Antonino, looking on this as he worked and laboured and wrote, learnt the lesson of life as taught by his friend Fra Angelico. Here, brimful of meaning, which yet would never tire or make afraid, was a splendid sermon by the most eloquent of Friar Preachers.

He looked and learned that patience in weariness, patience in waiting, patience in an incomplete state of being is the most precious virtue to have attained, so that ''through patience we might have hope." 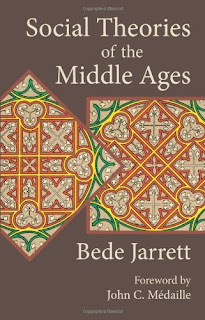 I went to Eighth Day Books last week in search of a used book by Etienne Gilson titled The Church Speaks to the Modern World: The Social Teachings of Pope Leo XIII (Warren is searching for a copy for me) and instead found a lovely little red book about economics! Dom Bede Jarrett, O.P. wrote a little trilogy on economics in the Middle Ages and I plan to read the other two works: Medieval Socialism and Social Theories of the Middle Ages, which will require another trip to Eighth Day Books!

The volume I purchased is volume 3 in the "Catholic Library" published in both England and the U.S.A.. The book came with the insert from the U.S. publisher, B. Herder of St. Louis, MO., in 1914 asking the receiving Editor to provide "as extensive a notice as possible" and to "favor me [the Publisher] with two marked copies of your paper containing notice."

Although the book refers to the saint and Medieval Economics in the title, Jarrett dedicates one chapter out of ten to "His Social Ideals". Jarrett provides a summary of St. Antonino's Summa Moralis on economic themes: Production, Distribution, and Consumption. The saint, who was Archbishop of Florence when Cosimo de Medici was resident in the Dominican convent of San Marco (which contains the great frescoes of Fra Angelico as referenced and illustrated above), writes about the moral aspects of commerce. He begins with the statement that riches are good and poverty is bad; riches are good because they allow a man to care for his family in relative security and comfort, provide for the common good, and give alms to the poor to alleviate their want. No one in a just state should be destitute of food, shelter, and clothing, but everyone must work according to their ability to support themselves and their families. Wealth also provides for the opportunity for prayer and meditation: riches are a means to good things, not an end. While good may be obtained through voluntary poverty (like that practiced by religious), poverty is not a good in and of itself.

St. Antonino did not expect or even suggest the even distribution of wealth, noting that inequality is part of Nature and while he joined in the universal condemnation of usury and was opposed to monopolies or cartels, he acknowledged that businessmen could and should make a profit, even on their invested capital, as it represents their industry and effort, not as money making money on itself. He condemns extravagance or conspicuous consumption: "For it is a sad thing to see, side by side, extravagance and penury, to see horses and mules gaily caparisoned while the poor perish from hunger; or in a plague-stricken city when the sick lie naked, cold, and foodless to find men and women dressed with vain and gaudy ornaments (II. 4, 4, vi. p. 581; II. 4, 5, ii. p. 591)" (p. 76). St. Antonino discusses the principles of just prices, just reward for labour, and just production and distribution of goods.

Jarrett sums up the saint's work on economics:

These ideals of Florence set out in four volumes of S. Antonino's Summa Moralis, put into complete activity in the Greater and Lesser Guilds, and lined in stone along the graceful facade of Or San Michele are commercial, it is true, but clean and religious and noble. They sum up a chivalrous and knightly aspect of mercantile adventure. They spell out the splendid Chronicles of the Romance of Trade.

In the chapter preceding this review of economic theory, Jarrett details the holy archbishop's efforts to provide for the poor through charitable foundations and almsgiving, stating:

Yet was his charity ever true, rooted in faith and glowing with trustfulness in the inherent goodness of redeemed humanity. It was synonymous with justice for it rested on fellowship and its piers were driven deep down into that human nature whereby all we mortals are akin. Charity for him was love and God was love.

St. Antonino of Florence's feast (May 10) is no longer included on the Roman Calendar but EWTN provides this biography of the saint from Rev.Alban Butler.

Cyril Jarrett, who received the name Bede when, at age 17, he entered the Dominican order in England. The Dominicans sent him to study at Oxford and at Louvain, where he received his degree in theology. Ordained in 1904, Fr. Jarrett was stationed at St. Dominic's Priory in London. At 33, he was named Prior there and, just two years later, was elected Provincial — an office he held the rest of his life. While serving as Provincial, Fr. Jarrett wrote numerous scholarly books, as well as a lively, popular biography of St. Dominic.

Fr. Jarrett's demanding schedule of preaching and lecture engagements in England and abroad soon brought him to the attention of Catholics in the pew. He inspired them with his profound grasp of human nature and his eloquent explanations of the wise and loving ways of God. That same eloquence and Catholic understanding permeates the meditations he penned for this book.

In his own life time he held a recognised position as the greatest preacher in Catholic England. The Times of London noted in his obituary that "he has been called the best Roman Catholic preacher in this country, and he was perhaps the most popular English preacher in the United States, his sermons being marked by their intellectual quality, their appositeness to the times and their incisiveness". He is the author of Classic Catholic Meditations, Life of St. Dominic, The abiding presence of the Holy Ghost in the soul, and Mediaeval Socialism.
Posted by Stephanie A. Mann at 12:30 AM