Were There Catholics at Jamestown? 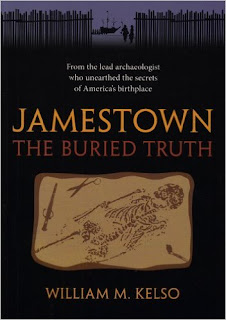 From The Atlantic, news that archaeologists have found indications that one of the founder of Jamestown, Captain Gabriel Archer, might have been a secret Catholic:

“One of the major surprises was the discovery of this mysterious small silver box,” said James Horn, the president of the Jamestown Rediscovery Foundation. “I have to say, we’re still trying to figure this out. You have the very strange situation of a Catholic reliquary being found with the leader of the first Protestant church in the country.”The finding is a historical bombshell, unearthed in a grave on the site of what was once the first church built at Jamestown. Which means researchers may have just discovered proof of an underground community of Catholics—including Archer and perhaps the person who buried him with the relic—who pretended to be Protestants.


“The first settlers there were mostly members of the Church of England,” said James O’Toole, a history professor at Boston College who focuses on the roots of American Catholicism. “While they didn't have the same active hostility to Catholics that the slightly later Puritan colonists in New England did, they were not particularly welcoming to Catholics. If there were Catholics in Tidewater Virginia ... that would be news.”

It’s the kind of discovery that makes historians, anthropologists, archaeologists, and other academics giddy with curiosity. But it raises even bigger questions, too—ideas that could rewrite our understanding of the intersection of religious and cultural identities in colonial America.

The English settlement of the New World is most often remembered as a Protestant endeavor. But if indeed there were Catholics at Jamestown, then, from the very beginning, it was a project pursued by those of multiple faiths, seeking new opportunities.

“There is this sense that American Catholic history begins in the 19th century with a wave of immigrants from Germany and Ireland in the 1820s and 1830s, but there is a history of earlier Catholicism,” said Maura Jane Farrelly, an associate professor of American studies at Brandeis University. “What’s captivating about it is the notion of the secretive nature. If he’s secretly Catholic, what does that faith mean to him that he’s willing to hold onto it even though it’s dangerous?”

I would take some issue with the statement that Anglicans weren't as actively hostile to Catholics in colonial England as Puritans. In England at least the Anglican Archbishop of Canterbury under James I had led crackdowns on Catholics. Jamestown had recusancy laws too, at least as stated in this Smithsonian article, which has another issue:

But hadn’t Catholicism been banished in England? Weren’t they all Anglicans? Yes, Horn pointed out, but there were still Catholics practicing underground. Rosary beads, medallions of saints and a crucifix carved on jet have also turned up at Jamestown. Gabriel Archer’s father was among the Catholics, called a “recusant” and cited in court for failing to attend Anglican services. Archer had learned resistance at home.

Elizabethan recusancy and penal laws never officially "banished" Catholicism. It was illegal to attend Catholic Mass, to convert to Catholicism or influence another to convert, and it was certainly illegal for Catholic priests to be in England. Jamesian laws, passed after the Gunpowder Plot scare in 1605, made it more difficult for a Catholic to live and work in England.

But if Captain Archer's father was a recusant and other Catholic objects have been dated to that period, as this paragraph implies, that silver box may indeed be a reliquary and Captain Archer a secret Catholic. Perhaps he was a Church Papist, outwardly conforming and secretly remaining a Catholic. One of the researchers in The Atlantic article wonders if Archer could have a Catholic priest, which seems doubtful: whatever other disguise Catholic priests in England donned, they would not attend a Church of England service in the normal course of events.

Fascinating.
Posted by Stephanie A. Mann at 1:00 AM