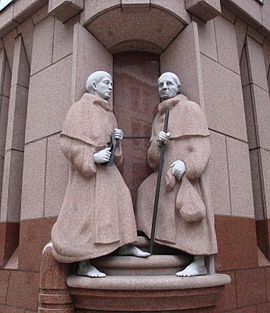 While researching a list of orders and their houses suppressed by Henry VIII between 1536 and 1540, I found an order I hadn't read about before: the Crutched Friars. According to the Catholic Encyclopedia, the Crutched Friars, or Crossed Friars were:

An order of mendicant friars who went to England in the thirteenth century from Italy, where they existed for some time, and where they were called "Fratres Cruciferi". There (sic) first appearance in England was at a synod of the Diocese of Rochester in 1244, when they presented documents from the pope and asked to be allowed to settle in the country (Matthew Paris). Each friar carried in his hand a wooden staff surmounted by a cross and also had a cross of red cloth upon his habit, from which circumstances originated the name by which they became commonly known. Their rule was that of St. Augustine and their habit originally brown or black, was later on changed to blue by Pope Pius II. They established eight or nine houses in England, the first being at either Colchester (according to Dugdale), or at Reigate (according to Reyner), founded in 1245. They settled in London in 1249, where they gave their name to the locality, near Tower Hill, still called "Crutched Friars". Other houses were at Oxford (1348), York, Great Weltham (Suffolk), Barham (a cell to Gt. Weltham), Wotten-under-Edge (Gloucestershire), Brackley (Northants) and Kildale (Yorkshire).

They were never a very large order, but they have been lost to history except for that area of London named for them and a pub in the area. More about them here.

The photo above is from Wikipedia commons, with the permission of the photographer. More about the sculpture here. It's too bad that the sculptor did not include the Crutched Friar cross on the staff held by one of the friars, since that's the identifying mark of the order! According to this site, the figures represent the title characters of a Hermann Hesse novel, Narcissus and Goldmund, but then the sculpture would have nothing to do with the Crutched Friars, since that novel is set in Germany and is about two German monks!
Posted by Stephanie A. Mann at 12:30 AM

Email ThisBlogThis!Share to TwitterShare to FacebookShare to Pinterest
Labels: Augustinian Friars, Henry VIII, The Crutched Friars, The Dissolution of the Monasteries