A Novel of Talk and Ideology: "The Leaves are Falling" 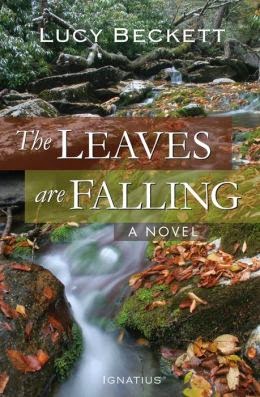 This is the fourth book by Lucy Beckett I've read, all published by Ignatius Press (she has also written about Wagnerian opera and Wallace Stevens). Her Light of Christ: Writings in the Western Tradition is a tremendous overview of Western literature; I read it through and still refer to it as a reference. It's a really great accomplishment from a teacher and lover of literature. The Time Before You Die is her novel set in England from the Dissolution of the Monasteries to the death of Mary I and Reginald Cardinal Pole, the last Catholic Archbishop of Canterbury, and effectively delineates the religious changes through that era. A Postcard from the Volcano is in some ways the prequel to this novel, and although it is also often made up of conversation, Beckett creates relationships and personal conflicts throughout the novel. As the stories of the seven friends develop, they face the coming danger of the Nazi regime and of the Soviet system, setting up the conflict of World War II. It was also an effective exploration, this time of the period between World War I and World War II, with discussions of philosophy, music and the arts, politics and ideology.

Beckett continues her exploration of the two great destructive ideologies of the twentieth century in this novel, but less successfully in my opinion. While I know and grant that she is writing in a certain genre, a novel of ideas, I wanted more depth from at least one of her main characters. As I read the book I kept waiting for something to happen. Beckett delivers her ideas through long conversations and indirection. The centerpiece of the novel is the Massacre at Katyn, in which almost 22,000 Polish prisoners of war were executed by the Soviets, who blamed the Nazis. In the first part, the surviving son of a Jewish (though not religiously Jewish) family from Vilnius, which was in Poland when he lived there, is a refugee in England, working on a farm. He tells the landowner, his sponsor, that the Soviets killed the Polish officers, including his father, and of course, is not believed. Josef Halpern, son of Jacob Halpern, lives in England, marries and has a child. In the framing device of the novel, he asks the narrator to tell his story. He then asks the narrator to tell his father's story, as she imagines Jacob Halpern's last days as a prisoner of war before his execution at Katyn. The novel closes with the novelist's last visit to Joseph in a nursing home and his reported death.

Although religion and God are often mentioned in the conversations, neither of the main characters practices any faith or worships God in prayer or ritual. Josef and Jacob are cultural Jews, knowing their history and its traditions, but not incorporating them in their lives. Thus the discussions about the evils of Nazism, or Communism, or Zionism never transcend the philosophical or theoretical, because they are not answered by lives of faith and action. Josef's family life, for example, is described, not depicted or dramatized, in four pages, with the anodyne comment that he and his wife were "as happy as most married people are who care for each other and have a little more than enough money to live on"! There is little passion or life in the characters and that's where the novel fails, at least in the section about Josef. I think it is because his confrontations with evil are always reported from the past as memories, not as something we see happening to him.

In part two, as Josef's father struggles for survival in the Soviet prisoner of war camp, there is some greater love and passion, particularly when a rabbi comforts a Christian prisoner on his deathbed. It was the one moment of the novel that moved me, as the rabbi recites the Lord's Prayer and helps the dying man reconcile with God by the confession of his sins. That act of faith, witnessed by Jacob, experienced by the Catholic Radek Dobrowski, and mediated by the Rabbi Baruch Steinberg, is the one great transcendent moment of love and faith in the novel. Jacob, perhaps moved by this example, is then able to comfort the young Catholic Pole with him before their executions at Katyn, "They can kill us. They can't hurt us."

The Leaves are Falling needed more such moments to exalt the true dignity and freedom of the human person beyond discussions of political systems. I think historical fiction needs to be more than a vehicle for the expression of ideas or verisimilitude of historical setting, with details about shortages and rationing in post war Britain, or the endlessly cited example of Vilna or Vilnius being first in Poland and then in Lithuania. For all the human tragedy depicted in The Leaves are Falling, I was not involved in the life of Josef Halpern because he was not fleshed out as a person beyond being a character and vehicle for discussion of the past or even of the errors of the present. Jacob Halpern emerges more fully as a person, growing in awareness, coming closer to something great. He becomes the hero of his story; his son does not.

Disclosure: I received a .pdf review copy from Ignatius Press in exchange for my honest opinion and review of The Leaves are Falling.
Posted by Stephanie A. Mann at 12:30 AM