A Charming Blast from the Past: "My Name Day -- Come for Dessert" 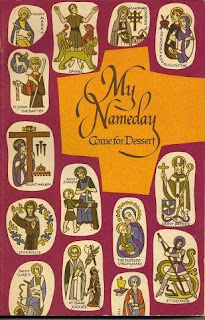 Eighth Day Books celebrated its 32nd anniversary this weekend and offered a discount of 35% on all used books and 20% off new. I found this treasure, written by Helen McLoughlin and published in 1962 by the Liturgical Press. She provides prayers, hymns, recipes, lives of the saints, shopping and organizing tips, and a whole world of ideas for the celebration of children's name days.
It's really a very dated book, with addresses of stores and other suppliers for the recipes and decorations she describes--Ye Olde Herb Shoppe on Dey Street in New York; Gourmet Magazine, the St. Leo Shop in Newport, RI where Ade Bethune sold her artwork, etc. Note that it's also based on the Roman Calendar before 1970.
EWTN provides the text of the book, and I think you know how happy I was when I saw that McLoughlin included the English Martyrs:
MARTYRS AND SAINTS OF GREAT BRITAIN

Four centuries ago an illustrious band of Englishmen sacrificed their lives because they would not deny the supremacy of the Pope. Said Blessed John Houghton, the first to be put to death: "Seeing that Jesus Christ gave spiritual power to His vicars by the words: 'I will give to thee the keys of heaven,' and no doctor has ever asserted these words to be spoken save to St. Peter only, which power is derived from him to the other apostles, and subsequently to the Pope and bishops--how could these words be so understood of a king, a layman and a secular person?"

The great Christian humanist Thomas More refused to recognize the king's sovereignty as spiritual head of the Anglican Church and died with a heroism full of good humor and simplicity. His friend Holbein has left a painting to show what a saint really looks like. For lawyers who claim him as their patron and for boys named after him, an excellent nameday gift is a color print from the Frick Collection (see FC, see Abbreviations). An 8 x 10 print costs only $.30; a 29 x 23 costs $15.00.

St. John Fisher, chaplain to the queen and chancellor of Cambridge University, was bishop of Rochester. His refusal to take the oath required of English bishops led to his imprisonment in the Tower of London, where he received the cardinal's hat shortly before his martyrdom.

Martyrs suffered in the reign of Henry VIII because they rejected his spiritual supremacy; in the time of Elizabeth they suffered for another reason. Not only was holy Mass prohibited, but it was treason for a priest to remain in England or for anyone to assist him. Consequently, many laymen and priests were martyred. (Only Thomas More and John Fisher have been canonized.) Among them were courageous women, such as Anne Line, hanged at Tyburn, and Margaret Clitherow, who was pressed to death at York.

Our favorite English martyr is Edmund Campion, S.J., who is immortalized in Robert Hugh Benson's book, "Come Rack, Come Rope." Children named Brian have patrons in Brian Lacey, a layman, and Brian Caulfield, a Jesuit. Another interesting name is Everard (Eberhard) after Blessed Everard Hanse, a converted Protestant minister who became a priest in Rheims and was butchered at Tyburn for his priesthood. An imported plaque of Edmund Campion costs $3.50 (AMS, see Abbreviations).

Other English martyrs include Oliver Plunkett, archbishop of Armagh, who was hanged, drawn and quartered in the persecution and whose relics are enshrined at Downside Abbey; Roger James, a Benedictine, whose given name is rendered for the Gaelic Rory and for the English Roy; George Gervase; Miles Gerard; Christopher Bales; Ralph Sherwin; Maurus Scott; David Lewis; Humphrey Middlemore; Walter Pierson; Robert Southwell, a Jesuit missionary to England and poet; Thurston Hunt; Arthur Bell; and Nicholas Owen, Jesuit lay-coordinator who saved countless priests by devising hiding places for them. Arthur Bell would be the patron for boys named Arthur since there is no saint having that name.

Boys called Howard, a name often given in families of Irish extraction, will be happy to find two patrons: Philip Howard, earl of Arundel, and his grandson, William Howard, viscount of Stafford. The crown dessert (see Crown Cake) carries a double significance on their feastday: their royalty and the reward of their martyrdom. Other beatified martyrs are Sidney Hodgson; Germain Gardiner; Eustace White; Richard Gwen, first martyr of Wales; and Sir Adrian Fortescue, Knight of the Bath and of St. John and a tertiary of St. Dominic.

Nameday desserts for these martyrs are Strawberry Frosted Layer Cake and Martyrs' Chiffon Dessert. A common symbol for them is the palm.

Prayer of the Beatified Martyrs

Father: Let us pray. Grant, almighty God, that we who admire in Your martyr N.... the courage of his glorious confession may witness in ourselves the power of his intercession. O God, who glorifies those who glorify You and who are honored in the honoring of Your saints, by the solemn judgment of Your Church glorify the blood of martyrs put to death in England for the testimony of Jesus, who lives and reigns forever.

All: Amen. Christ conquers, Christ reigns!
This book, and others Helen McLoughlin wrote including Family Advent Customs, Christmas to Candlemas, and Easter to Pentecost Family Customs, served as guides to bring the celebration of the liturgical year into the home. I've tried to find out more about the author but haven't had any luck on line. Please let me know if you have any for information.
Posted by Stephanie A. Mann at 12:00 AM