Francis Parkman, Jr. on the Jesuits and Freedom 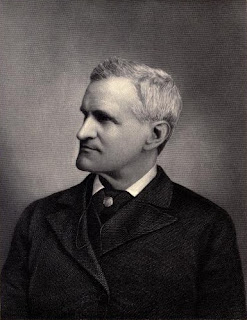 The American historian Francis Parkman, Jr. was born on September 16, 1823 and died on November 8, 1893. He is best known for his work The Oregon Trail: Sketches of Prairie and Rocky-Mountain Life (1849) and his seven-volume work France and England in North America (1865–1892). He's also known for his opposition to Women's Suffrage and indeed the extension of suffrage to anyone other than white males.

His interpretation of the colonial era as both England and France settled in North America has been challenged for its anti-Catholicism, as in this biography by W.J. Eccles in the Dictionary of Canadian Biography:

Parkman brought to his study of the French and British empires in North America certain preconceived beliefs and a priori assumptions that gave his work cohesion but resulted in a depiction of colonial society and events that bears little relation to fact. His work perhaps compares best to that of his contemporary, George Alfred Henty, the British writer of jingoistic historical novels for a juvenile audience. The British have long since shrugged off Henty, but the Americans, and many Anglo-Canadians, cling to Parkman’s version of their history. The past he judged by the values of a mid-19th-century Boston Brahmin, which, of course, he was. He believed, fervently, in the concept of progress, in American manifest destiny, and in the inevitability of the British conquest of New France since that last had been essential to ensure the subsequent independence of the United States. Thus he committed the mortal sin for a historian: because it happened, it therefore had to happen.

Britain’s struggle with France in the colonial wars was, to him, a Manichæan conflict between the forces of light and of darkness: between the fledgling American nation, representing progress and Anglo-Saxon Protestant liberty, and New France, embodying Roman Catholic absolutism. As Parkman put it in Montcalm and Wolfe (1884): “It was the strife, too, of the past against the future . . . of barren absolutism against a liberty, crude, incoherent, and chaotic, yet full of prolific vitality.” Thus the New Englanders were possessed of an “uncommon vigor, joined to the hardy virtues of a masculine race.” The Canadians, on the other hand, exhibited serf-like subordination to their feudal lords: brave soldiers and explorers, certainly, but foreordained to give way before the disciples of progress. This basic concept gave his works the dramatic force of a Greek tragedy.

Yet Parkman was no believer in democracy and he spoke out vigorously against it. He regarded the granting of the suffrage to the lower classes, white or black, as “the most dangerous enemy of liberal government.” He was also bitterly opposed to women’s suffrage and the temperance movement. With the anti-slavery movement he had no sympathy. He was an ardent proponent of what came to be known as Social Darwinism. Nothing succeeds like success, and success is justification enough of the means used to achieve it.

If one believed in the "cancel culture" of our era, one could say that the Society for American Historians should stop awarding the Francis Parkman Prize for the best work of American History each year because of these ideas. He was a man of his era, obviously--the real problem that Eccles cites is that Parkman may misused primary sources, especially in French, because of his lack of facility in that language--and his works may be more suitably admired for their style, but not for their substance.

Just a dip into his second volume of France and England in North America, The Jesuits in North America in the Seventeenth Century, displays the common animus of Protestant America against Catholic authority and those who represent it, including the French of the colonial era:

Few passages of history are more striking than those which record the efforts of the earlier French Jesuits to convert the Indians. Full as they are of dramatic and philosophic interest, bearing strongly on the political destinies of America, and closely involved with the history of its native population, it is wonderful that they have been left so long in obscurity. While the infant colonies of England still clung feebly to the shores of the Atlantic, events deeply ominous to their future were in progress, unknown to them, in the very heart of the continent. It will be seen, in the sequel of this volume, that civil and religious liberty found strange allies in this Western World.

And from the last chapter, "The End":

With the fall of the Hurons, fell the best hope of the Canadian mission. They, and the stable and populous communities around them, had been the rude material from which the Jesuit would have formed his Christian empire in the wilderness; but, one by one, these kindred peoples were uprooted and swept away, while the neighboring Algonquins, to whom they had been a bulwark, were involved with them in a common ruin. The land of promise was turned to a solitude and a desolation. There was still work in hand, it is true,—vast regions to explore, and countless heathens to snatch from perdition; but these, for the most part, were remote and scattered hordes, from whose conversion it was vain to look for the same solid and decisive results. . . .

The cause of the failure of the Jesuits is obvious. The guns and tomahawks of the Iroquois were the ruin of their hopes. Could they have curbed or converted those ferocious bands, it is little less than certain that their dream would have become a reality. Savages tamed—not civilized, for that was scarcely possible—would have been distributed in communities through the valleys of the Great Lakes and the Mississippi, ruled by priests in the interest of Catholicity and of France. Their habits of agriculture would have been developed, and their instincts of mutual slaughter repressed. The swift decline of the Indian population would have been arrested; and it would have been made, through the fur-trade, a source of prosperity to New France. Unmolested by Indian enemies, and fed by a rich commerce, she would have put forth a vigorous growth. True to her far-reaching and adventurous genius, she would have occupied the West with traders, settlers, and garrisons, and cut up the virgin wilderness into fiefs, while as yet the colonies of England were but a weak and broken line along the shore of the Atlantic; and when at last the great conflict came, England and Liberty would have been confronted, not by a depleted antagonist, still feeble from the exhaustion of a starved and persecuted infancy, but by an athletic champion of the principles of Richelieu and of Loyola.

Liberty may thank the Iroquois, that, by their insensate fury, the plans of her adversary were brought to nought, and a peril and a woe averted from her future. They ruined the trade which was the life-blood of New France; they stopped the current of her arteries, and made all her early years a misery and a terror. Not that they changed her destinies. The contest on this continent between Liberty and Absolutism was never doubtful; but the triumph of the one would have been dearly bought, and the downfall of the other incomplete. Populations formed in the ideas and habits of a feudal monarchy, and controlled by a hierarchy profoundly hostile to freedom of thought, would have remained a hindrance and a stumbling-block in the way of that majestic experiment of which America is the field.

The Jesuits saw their hopes struck down; and their faith, though not shaken, was sorely tried. The Providence of God seemed in their eyes dark and inexplicable; but, from the stand-point of Liberty, that Providence is clear as the sun at noon. Meanwhile let those who have prevailed yield due honor to the defeated. Their virtues shine amidst the rubbish of error, like diamonds and gold in the gravel of the torrent.

But now new scenes succeed, and other actors enter on the stage, a hardy and valiant band, moulded to endure and dare,—the Discoverers of the Great West.

Those passages also exemplify the power of Parkman's style, which Eccles acknowledges while warning the reader against falling under its spell. This is exactly the view of American Freedom against Catholic Authority described in Maura Jane Farrelly's Anti-Catholicism in America! Parkman had obviously grown up with this view and was never challenged.

More on Francis Parkman's The Jesuits in North America in the Seventeenth Century here and here from The Dawson Newsletter, via EWTN.
Posted by Stephanie A. Mann at 12:00 AM