His Faith Was His Crime: St. John Southworth 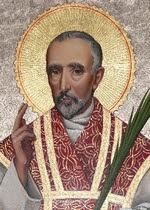 The Archdiocese of Westminster celebrates its martyr saint today, St. John Southworth, executed for the crime of being a priest in 1654. He had been arrested and protected by Queen Henrietta Maria and suffered imprisonment several times. Southworth assisted St. Henry Morse, SJ, during an attack of the plague. Finally, he was arrested and executed during Oliver Cromwell's Protectorate.
As the Westminster Cathedral website explains:
In 1618, John Southworth was ordained a priest at the English College, Douai (Douay) in Northern France. After returning to England, he was arrested and condemned to death in Lancashire in 1626, and imprisoned first in Lancaster Castle, and afterwards in the Clink Prison, London. On 11 April, 1630, he and some other priests were delivered to the French Ambassador for transportation abroad, but, in 1636, he was reported to have been released from the Gatehouse, Westminster, and was living at Clerkenwell. From there it seems he frequently visited the plague-stricken dwellings of Westminster to administer the sacraments and comfort the sick and the dying. In 1637, he appears to have been based in Westminster, where he was arrested on 28 November, before being again sent to the Gatehouse. From there he was transferred to the Clink and, in 1640, was brought before the Commissioners for Causes Ecclesiastical, who sent him back there.

On 16 July, John Southworth was again freed, but by 2 December he was once more imprisoned in the Gatehouse. After his final apprehension on 19 June 1654, he was tried at the Old Bailey, where he insisted on pleading guilty to being a priest. He was reluctantly condemned to be hung, drawn and quartered. On the day of his martyrdom, he was allowed to make a long speech at the gallows.
Among his last words:

“My faith and obedience to my superiors is all the treason charged against me; nay, I die for Christ’s law, which no human law, by whomsoever made, ought to withstand or contradict… To follow His holy doctrine and imitate His holy death, I willingly suffer at present; this gallows I look on as His Cross, which I gladly take to follow my Dear Saviour…I plead not for myself…but for you poor persecuted Catholics whom I leave behind me.

"My faith is my crime, the performance of my duty the occasion of my condemnation. I confess I am a great sinner; against God I have offended, but am innocent of any sin against man, I mean the Commonwealth, and the present Government."

The Venetian Secretary reported on his execution: he was hanged, and was not dead when the executioner "cut out his heart and entrails and threw them into a fire kindled for the purpose, the body being quartered . . . Such is the inhuman cruelty used towards the English Catholic religious."
The Spanish ambassador returned his corpse to Douai for burial. His corpse was sewn together and parboiled, to preserve it. Following the French Revolution, his body was buried in an unmarked grave for its protection. The grave was discovered in 1927 and his remains were returned to England. They are now kept in Westminster Cathedral in London. He was beatified in 1929. In 1970, he was canonized by Pope Paul VI as one of the Forty Martyrs of England and Wales. The Cathedral honors him with a guild and the diocese celebrates his feast today.

Last year, the Cardinal Archbishop of Westminster, Vincent Nichols, highlighted St. John Southworth in a pastoral letter asking everyone to pray for their priests, including those who were being ordained that year:

St John Southworth is a key patron saint of the priests of this diocese. He is an inspiration and an intercessor for us. We bring his body into the central aisle of the cathedral not only for his feast day but so that he is there among the candidates for the priesthood on the day of their ordination. Next Saturday, in the cathedral, six men will be ordained priests for service in our parishes. During the singing of the Litany of the Saints, they will prostrate themselves, face down on the floor. In their midst will be the prostrate body of the Martyr. But he lies face up, reflecting the glory of God shining in him as he now enjoys the fullness of God's grace in heaven. He is indeed our special patron.

Today I ask you to pray for all our priests. Pray particularly for the six new priests and the priest(s) serving in your parish. Our lives may not be as dramatic nor as full of public conflict as the life of St John Southworth. Yet we priests strive to express in our daily ministry exactly the same dedication to the mission of Jesus Our Lord as he did. Like him, we depend on the support and love of faithful people. For St John Southworth that was literally a matter of life and death. While that deadly drama has ended, over the centuries a marvellous tradition has remained of genuine love for priests and a readiness to support them, through thick and thin. I ask you, today, to continue that tradition and share it with your families.