O'Connor and Dostoevsky "Giving the Devil His Due" 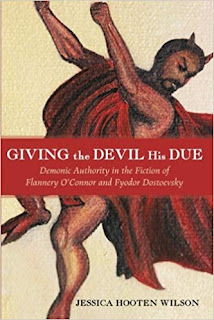 Warren Farha at Eighth Day Books recommended this book, so I bought and read it. From the publisher, Wipf and Stock, whom Warren told me has been recently become more accommodating to bookstores (allowing returns, lowering prices, etc):

Flannery O'Connor and Fyodor Dostoevsky shared a deep faith in Christ, which compelled them to tell stories that force readers to choose between eternal life and demonic possession. Their either-or extremism has not become more popular in the last fifty to a hundred years since these stories were first published, but it has become more relevant to a twenty-first-century culture in which the lukewarm middle ground seems the most comfortable place to dwell. Giving the Devil His Due walks through all of O'Connor's stories and looks closely at Dostoevsky's magnum opus The Brothers Karamazov to show that when the devil rules, all hell breaks loose. Instead of this kingdom of violence, O'Connor and Dostoevsky propose a kingdom of love, one that is only possible when the Lord again is king.

I wish Wilson would have expanded her survey of Dostoevsky's oeuvre to include The Possessed and The Idiot: sometimes her examples from The Brothers Karamazov became repetitive, and I thought her discussions of evil and the devil and God and grace just cried out for Prince Myshkin, especially as she used Rene Girard's scapegoat theory. When there's a section heading like "Imitating Christ: Like a Child or Like An Idiot" late in the book (p. 129), I thought again, where's Prince Myshkin, beyond the mention of Romano Guardini's essay on The Idiot? As the blurb above notes, she surveys all of O'Connor's stories and even unfinished works and the lack of balance showed. Her analysis of Dostoevsky's and O'Connor's authorial intentions and understanding of their work was excellent throughout the book. Her theological insights are also valid, but I think she demonstrates more sympathy with O'Connor's Catholic faith than with Dostoevsky's Orthodox Christianity.

I kept thinking that there would be some reference to St. Thomas More, given the title. When I looked in the index, there were three pages listed, but two of them never contained anything about St. Thomas More, in fact, no more than the word "More" capitalized. The other page was in the bibliography, listing More's Utopia! Utopia is not in the index, and I don't remember any citation of it, either. The publisher must have used some search algorithm that did not distinguish between "More" and St. Thomas More! Minor irritant, to be sure.
Posted by Stephanie A. Mann at 12:30 AM