England and Britain and English, Etc. 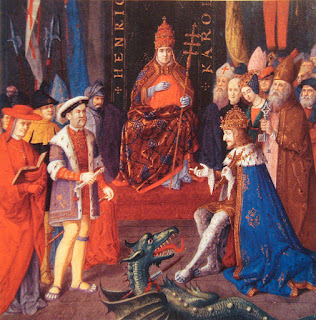 I thought this overview of English history from the Anglo-Saxons to the Empire and beyond was forthright in noting the close relationship between England and Rome before the English Reformation:

The Tudors were Welsh by origin and it was Henry Tudor’s son, Henry VIII, who incorporated Wales into England, though it retained its distinctive language and identity. It was also Henry VIII who, in the course of his celebrated dispute with the papacy about the status of his marriage to his first wife, Catherine of Aragon, pulled England out of the Church of Rome.

This defining moment in English history was deeply traumatic for the English, who had long proudly maintained their ‘special relationship’ with the papacy. It was especially felt when the break with Rome led to first Lutheran and then Calvinist Protestantism putting down roots in England, especially in the larger towns and in the south and east of the kingdom. This religious turmoil culminated, under the reign of Elizabeth I, in the establishment of a hybrid ‘Church of England’, which maintained the structures, hierarchy and fabric of the Roman church, but combined them with a clearly Protestant theology. The Church of England also covered Wales; in Ireland, however, it was confined to the English settler population. Scotland had its own separate Presbyterian (i.e. Calvinist) Church.

Under the Tudors, England developed as a highly successful state, with its government heavily centralised on London, which provided close links to the continent. The English language developed into the sophisticated poetry of Shakespeare and, as English people began to settle overseas, it began its spread into today’s global language. The Tudor period also saw the growth of the power of the English parliament and a closer, more interdependent relationship between England and Scotland.