The Duke Who Was a Butler, A Late Jacobite, RIP 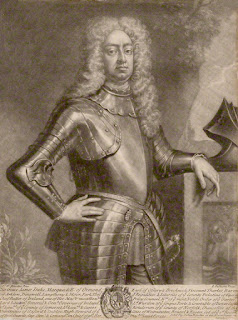 Or, if you prefer, the Butler who was a Duke: James FitzJames Butler, 2nd Duke of Ormonde, an Irish Protestant statesman, at first served King James II, then switched sides to William and Mary, switching back again after Anne died and George I of Hanover succeeded during the '15. According to the 1911 Encyclopædia Britannica he was born in Dublin on April 29, 1665 and educated in France and then at Christ Church, Oxford. Then:

He obtained command of a cavalry regiment in Ireland in 1684, and having received an appointment at court on the accession of James II., he served against the duke of Monmouth. Having succeeded his grandfather as duke of Ormonde in 1688, he joined William of Orange, by whom he was made colonel of a regiment of horse-guards, which he commanded at the battle of the Boyne. In 1691 he served on the continent under William, and after the accession of Anne he was placed in command of the land forces co-operating with Sir George Rooke in Spain. Having been made a privy councillor, Ormonde succeeded Rochester as viceroy of Ireland in 1703, a post which he held till 1707. On the dismissal of the duke of Marlborough in 1711, Ormonde was appointed captain general in his place, and allowed himself to be made the tool of the Tory ministry, whose policy was to carry on the war in the Netherlands while giving secret orders to Ormonde to take no active part in supporting their allies under Prince Eugene. Ormonde's position as captain-general made him a personage of much importance in the crisis brought about by the death of Queen Anne. Though he had supported the revolution of 1688, he was traditionally a Tory, and Lord Bolingbroke was his political leader. During the last years of Queen Anne he almost certainly had Jacobite leanings, and corresponded with the duke of Berwick. He joined Bolingbroke and Oxford, however, in signing the proclamation of King George I., by whom he was nevertheless deprived of the captain-generalship. In June 1715 he was impeached, and fled to France, where he for some time resided with Bolingbroke, and in 1716 his immense estates were confiscated to the crown by act of parliament, though by a subsequent act his brother, Charles Butler, earl of Arran, was enabled to repurchase them. After taking part in the Jacobite invasion in 1715, Ormonde settled in Spain, where he was in favour at court and enjoyed a pension from the crown. Towards the end of his life he resided much at Avignon, where he was seen in 1733 by Lady Mary Wortley Montagu. Ormonde died on the 16th of November 1745, and was buried in Westminster Abbey.

With little of his grandfather's ability, and inferior to him in elevation of character, Ormonde was nevertheless one of the great figures of his time. Handsome, dignified, magnanimous and open-handed, and free from the meanness, treachery and venality of many of his leading contemporaries, he enjoyed a popularity which, with greater stability of purpose, might have enabled him to exercise commanding influence over events.

According to the Westminster Abbey website, James Butler was interred in the family

vault on 22nd May 1746. His first wife was Lady Anne Hyde, daughter of Lawrence, 1st Earl of Rochester. Two young children by her were buried in the vault (Elisabeth and Mary). His second wife was Mary Somerset, daughter of Henry, Duke of Beaufort. She is said never to have seen her husband during his exile and she was buried on 25th November 1733. Their son Thomas was buried 1689, daughter Henrietta in 1701 and Elizabeth(who died unmarried) in 1750.
Posted by Stephanie A. Mann at 12:30 AM