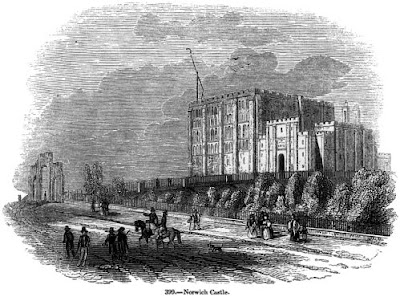 According to the Catholic Encyclopedia, Blessed Thomas Tunstall, OSB, who was beatified by Pope Pius XI in 1929, was:

Martyred at Norwich, 13 July, 1616. He was descended from the Tunstalls of Thurland, an ancient Lancashire family who afterwards settled in Yorkshire. In the Douay Diaries he is called by the alias of Helmes and is described as Carleolensis, that is, born within the ancient Diocese of Carlisle. He took the College oath at Douay on 24 May, 1607; received minor orders at Arras, 13 June, 1609, and the subdiaconate at Douay on 24 June following. The diary does not record his ordination to the diaconate or priesthood, but he left the college as a priest on 17 August, 1610. On reaching England he was almost immediately apprehended and spent four or five years in various prisons till he succeeded in escaping from Wisbech Castle. He made his way to a friend's house near Lynn, where is was recaptured and committed to Norwich Gaol. At the next assizes he was tried and condemned (12 July, 1616). The saintliness of his demeanor on the scaffold produced a profound impression on the people. There is a contemporary portrait of the martyr at Stonyhurst, showing him as a man still young with abundant black hair and dark moustache.

Two years ago, the Catholic diocese of East Anglia celebrated the 400th anniversary of his execution, and provides this detail (with a variation in the date of his execution):

He made his way to a safe house in King's Lynn but had injured his hand during his escape and, when he looked for medical help, was re-captured and taken to Norwich Castle.

On July 12, 1616, Thomas was tried and condemned as a Catholic priest and sentenced to be hanged, drawn and quartered just outside of the city's Magdalen Gate where, today, Magpie Road meets Bull Close Road. A later record of the execution says that this young man, with his abundant black hair and moustache, showed more than natural courage as he prayed for his accuser and thanked him for being instrumental in his death.

Image credit: A mid-19th-century engraving of Norwich Castle (where Blessed Thomas Tunstall was imprisoned) from Charles Knight's Old England: A Pictorial Museum (1845).
Posted by Stephanie A. Mann at 12:00 AM