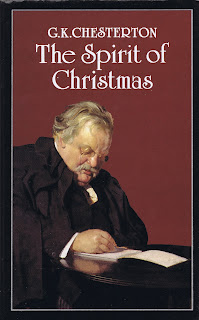 As George Marlin wrote at The Catholic Thing on December 29, 2009: " . . .Chesterton’s publisher at Sheed and Ward (and later his biographer), Maisie Ward, described his essays as going “to the heart of his thought. Some men, it may be, are best moved to reform by hate, but Chesterton was best moved by love and nowhere does that love shine more clearly than in all he wrote about Christmas.”

The Greater Wichita local society of the American Chesterton Society will gather tonight to celebration this Chestertonian Spirit of Christmas, sharing poems, essays, insights, and refreshments. We'll gather on the second floor of Eighth Day Books at 6:30 p.m.

In January, we'll continue our discussion of Lepanto, reading two essays by Chesterton: "The True Romance" and "If Don John of Austria Had Married Mary Queen of Scots". The title of the second essay is very enticing! What do you think would have happened if the victor of Lepanto had married the Queen of Scotland?
Posted by Stephanie A. Mann at 12:30 AM