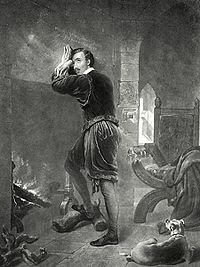 Just a reminder that today is the anniversary of St. Philip Howard's death in the Tower of London in 1595. From my blog post at the National Catholic Register website:

In the meantime, another Jesuit, Father Robert Southwell, was using Arundell House as his base of operations in West Sussex, serving as Anne Howard’s chaplain. Southwell wrote An Epistle of Comfort for Howard’s consolation. In 1592, he was arrested and after horrendous torture, imprisoned in the Tower of London. Howard’s dog was their messenger for a time before Southwell’s execution on February 21, 1595.

Howard had been condemned to death at his second trial in Westminster Hall, accused of praying for the success of the Spanish Armada in 1588. Incarceration and the stress of never knowing when the death sentence would be carried out were affecting his health and in August, 1595, he became violently ill of dysentery—poison was even suspected.

“But One Life to Lose”

Howard sent a message to Elizabeth I, begging to see his wife, his daughter, and the son born after his imprisonment. She replied that he could and would be freed and all his estates and honors restored, if only he would renounce his faith and attend a Church of England service. He responded that he could not accept such terms: “If that be the cause for which I am to perish, sorry am I that I have but one life to lose.”

This sixteenth century Nathan Hale died of dysentery on Sunday, October 19, 1595 at noon. He was 38. Buried in the Tower’s other chapel, St. Peter ad Vincula with his father, his widow survived him long enough to have his body disinterred and buried in the FitzAlan Chapel in Arundel.

I'll be on the Son Rise Morning Show this morning to talk about this great martyr. 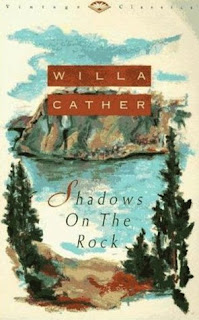 In Willa Cather's novel set in seventeenth century Quebec, Shadows on the Rock, a priest explains why one of those martyrs has inspired him so greatly:

"There was among the early missionaries, among the martyrs, one whom I have selected for my especial reverence. I mean Noël Chabanel, Euclide. He was not so great a figure as Brébeuf or Jogues or Lalemant, but I feel a peculiar sympathy for him. He perished, you remember, in the great Iroquois raid of '49. But his martyrdom was his life, not his death.

"He was a little different from all the others,--equal to them in desire, but not in fitness. He was only thirty years of age when he came, and was from Toulouse, that gracious city.

"Chabanel had been a professor of rhetoric like me, and like me he was fond of the decencies, the elegancies of life. From the beginning his life in Canada was one long humiliation and disappointment. Strange to say, he was utterly unable to learn the Huron language, though he was a master of Greek and Hebrew and spoke both Italian and Spanish. After five years of devoted study he was still unable to converse or to preach in any Indian tongue. He was sent out to the mission of Saint Jean in the Tobacco nation, as helper to Father Charles Gamier. Father Gamier, though not at all Chabanel's equal in scholarship, had learned the Huron language so thoroughly that the Indians said there was nothing more to teach him,--he spoke like one of themselves.

"His humiliating inability to learn the language was only one of poor Chabanel's mortifications. He had no love for his converts. Everything about the savages and their mode of life was utterly repulsive and horrible to him; their filth, their indecency, their cruelty. The very smell of their bodies revolted him to nausea. He could never feel toward them that long-suffering love which has been the consolation of our missionaries. He never became hardened to any of the privations of his life, not even to the vermin and mosquitos that preyed upon his body, nor to the smoke and smells in the savage wigwams. In his struggle to learn the language he went and lived with the Indians, sleeping in their bark shelters, crowded with dogs and dirty savages. Often Father Chabanel would lie out in the snow until he was in danger of a death self-inflicted, and only then creep inside the wigwam. The food was so hateful to him that one might say he lived upon fasting. The flesh of dogs he could never eat without becoming ill, and even corn-meal boiled in dirty water and dirty kettles brought on vomiting; so that he used to beg the women to give him a little uncooked meal in his hand, and upon that he subsisted.

"The Huron converts were more brutal to him than to Father Gamier. They were contemptuous of his backwardness in their language, and they must have divined his excessive sensibility, for they took every occasion to outrage it. In the wigwam they tirelessly perpetrated indecencies to wound him. Once when a hunting party returned after a long famine, they invited him to a feast of flesh. After he had swallowed the portion in his bowl, they pulled a human hand out of the kettle to show him that he had eaten of an Iroquois prisoner. He became ill at once, and they followed him into the forest to make merry over his retchings.

"But through all these physical sufferings, which remained as sharp as on the first day, the greatest of his sufferings was an almost continual sense of the withdrawal of God. All missionaries have that anguish at times, but with Chabanel it was continual. For long months, for a whole winter, he would exist in the forest, every human sense outraged, and with no assurance of the nearness of God. In those seasons of despair he was constantly beset by temptation in the form of homesickness. He longed to leave the mission to priests who were better suited to its hardships, to return to France and teach the young, and to find again that peace of soul, that cleanliness and order, which made him the master of his mind and its powers. Everything that he had lost was awaiting him in France, and the Director of Missions in Quebec had suggested his return.

"On Corpus Christi Day, in the fifth year of his labours in Canada and the thirty-fifth of his age, he cut short this struggle and overcame his temptation. At the mission of Saint Matthias, in the presence of the Blessed Sacrament exposed, he made a vow of perpetual stability (perpetuam stabilitatem) in the Huron missions. This vow he recorded in writing, and he sent copies of it to his brethren in Kebec.

"Having made up his mind to die in the wilderness, he had not long to wait. Two years later he perished when the mission of Saint Jean was destroyed by the Iroquois,--though whether he died of cold in his flight through the forest, or was murdered by a faithless convert for the sake of the poor belongings he carried on his back, was not surely known. No man ever gave up more for Christ than Noël Chabanel; many gave all, but few had so much to give.

"It was perhaps in memory of his sufferings that I, in my turn, made a vow of perpetual stability. For those of us who are unsteadfast by nature, who have other lawful loves than our devotion to our converts, it is perhaps the safest way. My sacrifice is poor compared with his. I was able to learn the Indian languages; I have a house where I can, at least, pray in solitude; I can keep clean, and am seldom hungry, except by accident in the journeys I have to make. But Noël Chabanel--ah, when your faith is cold, think of him! How can there be men in France this day who doubt the existence of God, when for the love of Him weak human beings have been able to endure so much?"

How, indeed, can there be men and women anywhere who doubt the existence of God when men and women have been willing and able to endure so much?