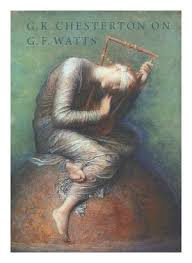 G.K. is of course G.K. Chesterton (Gilbert Keith); G.F. Watts is George Frederick Watts, the Victorian era artist. The G.K. and Frances Chesterton facebook page (on August 29, 2016) featured a long quote from his book about G.F. Watts, published in 1904. Chesterton introduces his remarks about the painting by noting that the observer will at first think it misnamed:

His first thought, of course, would be that the picture was called Despair; his second (when he discovered his error in the catalogue), that it has been entered under the wrong number; his third, that the painter was mad. But if we imagine that he overcame these preliminary feelings and that as he stared at that queer twilight picture a dim and powerful sense of meaning began to grow upon him—what would he see? He would see something for which there is neither speech nor language, which has been too vast for any eye to see and too secret for any religion to utter, even as an esoteric doctrine. Standing before that picture, he finds himself in the presence of a great truth. He perceives that there is something in man which is always apparently on the eve of disappearing, but never disappears, an assurance which is always apparently saying farewell and yet illimitably lingers, a string which is always stretched to snapping and yet never snaps. He perceives that the queerest and most delicate thing in us, the most fragile, the most fantastic, is in truth the backbone and indestructible. He knows a great moral fact: that there never was an age of assurance, that there never was an age of faith. Faith is always at a disadvantage; it is a perpetually defeated thing which survives all its conquerors. The desperate modern talk about dark days and reeling altars, and the end of Gods and angels, is the oldest talk in the world: lamentations over the growth of agnosticism can be found in the monkish sermons of the dark ages; horror at youthful impiety can be found in the Iliad. This is the thing that never deserts men and yet always, with daring diplomacy, threatens to desert them. It has indeed dwelt among and controlled all the kings and crowds, but only with the air of a pilgrim passing by. It has indeed warmed and lit men from the beginning of Eden with an unending glow, but it was the glow of an eternal sunset.

Here, in this dim picture, its trick is almost betrayed. No one can name this picture properly, but Watts, who painted it, has named it Hope. But the point is that this title is not (as those think who call it "literary") the reality behind the symbol, but another symbol for the same thing, or, to speak yet more strictly, another symbol describing another part or aspect of the same complex reality. Two men felt a swift, violent, invisible thing in the world: one said the word "hope," the other painted a picture in blue and green paint. The picture is inadequate; the word "hope" is inadequate; but between them, like two angles in the calculation of a distance, they almost locate a mystery, a mystery that for hundreds of ages has been hunted by men and evaded them. And the title is therefore not so much the substance of one of Watts' pictures, it is rather an epigram upon it. It is merely an approximate attempt to convey, by snatching up the tool of another craftsman, the direction attempted in the painter's own craft. He calls it Hope, and that is perhaps the best title. It reminds us among other things of a fact which is too little remembered, that faith, hope, and charity, the three mystical virtues of Christianity, are also the gayest of the virtues. Paganism, as I have suggested, is not gay, but rather nobly sad; the spirit of Watts, which is as a rule nobly sad also, here comes nearer perhaps than anywhere else to mysticism in the strict sense, the mysticism which is full of secret passion and belief, like that of Fra Angelico or Blake. But though Watts calls his tremendous reality Hope, we may call it many other things. Call it faith, call it vitality, call it the will to live, call it the religion of to-morrow morning, call it the immortality of man, call it self-love and vanity; it is the thing that explains why man survives all things and why there is no such thing as a pessimist. 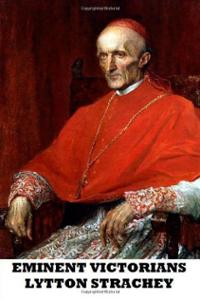 Chesterton analyzes both the allegorical paintings and the many portraits of famous literary men and others by Watts. Watts produced the 1882 portrait of Cardinal Henry Manning, seen here as the cover illustration for an edition of Strachey's Eminent Victorians. Chesterton finds fault with Watts' portraiture, however, commenting:

He makes all his portraits too classical. It may seem like a paradox to say that he makes them too human; but humanity is a classis and therefore classical. He recurs too much to the correct type which includes all men. He has, for instance, a worship of great men so complete that it makes him tend in the direction of painting them all alike. There may be too much of Browning in his Tennyson, too much of Tennyson in his Browning. There is certainly a touch of Manning in his John Stuart Mill, and a touch of the Minotaur in many of his portraits of Imperial politicians. While he celebrates the individual with a peculiar insight, it is nevertheless always referred to a general human type.

Chesterton thinks Watts has gone too far in depicting Manning's ascetism and its results:

The portrait of Cardinal Manning is worth a further and special notice, because it is an illustration of the fact to which I have before alluded: the fact that while Watts in one sense always gets the best out of his sitters, he does not by any means always get the handsomest out of them. Manning was a singularly fine-looking man, even in his emaciation. A friend of mine, who was particularly artistic both by instinct and habits, gazed for a long time at a photograph of the terrible old man clad in those Cardinal's robes and regalia in which he exercised more than a Cardinal's power, and said reflectively, "He would have made his fortune as a model." A great many of the photographs of Manning, indeed almost any casual glimpses of him, present him as more beautiful than he appears in Watts' portrait. To the ordinary onlooker there was behind the wreck of flesh and the splendid skeleton the remains of a very handsome English gentleman; relics of one who might have hunted foxes and married an American heiress. Watts has no eyes for anything except that sublime vow which he would himself repudiate, that awful Church which he would himself disown. He exaggerates the devotionalism of Manning. He is more ascetic than the ascetics; more Catholic than Catholicism. Just so, he would be, if he were painting the Sheik-el-Islam, more Moslem than the Mohammedans. He has no eyes but for ideas.

Project Gutenberg of Australia has made the text of Chesterton's book on Watts available online, including 32 works of Watts, both allegories and portraits.
Posted by Stephanie A. Mann at 12:30 AM