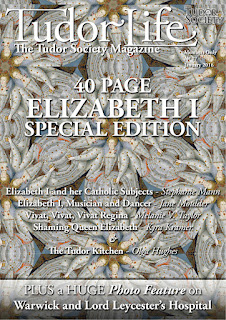 I am sorry for the lack of blogging in the past few days, but I've been much at the hospital with a family member and focused on the present, not the past.

I do want to let you know that I've had an article published in the January 2016 issue of Tudor Life: The Tudor Society Magazine: "Elizabeth I and Her Catholic Subjects".

And, I'll start the New Year on the broadcast of the Son Rise Morning Show Monday morning, January 4, 2016, talking with Matt Swaim about the "Twelve Days of Christmas" carol as a hidden, coded Catholic catechism during the Recusant period in England. My usual time slot: after the 7:45 a.m. Eastern/6:45 a.m. Central update/break. Listen live here.