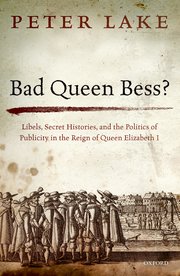 From the publisher, Oxford University Press:

Bad Queen Bess? analyses the back and forth between the Elizabethan regime and various Catholic critics, who, from the early 1570s to the early 1590s, sought to characterize that regime as a conspiracy of evil counsel. Through a genre novel - the libellous secret history - to English political discourse, various (usually anonymous) Catholic authors claimed to reveal to the public what was "really happening" behind the curtain of official lies and disinformation with which the clique of evil counsellors at the heart of the Elizabethan state habitually cloaked their sinister maneuvers. Elements within the regime, centred on William Cecil and his circle, replied to these assaults with their own species of plot talk and libellous secret history, specializing in conspiracy-driven accounts of the Catholic, Marian [Mary, Queen of Scots], and then, latterly, Spanish threats.

Peter Lake presents a series of (mutually constitutive) moves and counter moves, in the course of which the regime's claims to represent a form of public political virtue, to speak for the commonweal and true religion, elicited from certain Catholic critics a simply inverted rhetoric of private political vice, persecution, and tyranny. The resulting exchanges are read not only as a species of "political thought," but as a way of thinking about politics as process and of distinguishing between "politics" and "religion." They are also analyzed as modes of political communication and pitch-making - involving print, circulating manuscripts, performance, and rumor - and thus as constitutive of an emergent mode of "public politics" and perhaps of a "post reformation public sphere." While the focus is primarily English, the origins and imbrication of these texts within, and their direct address to, wider European events and audiences is always present. The aim is thus to contribute simultaneously to the political, cultural, intellectual, and religious histories of the period.

Oxford also notes that in Bad Queen Bess?: Libellous Politics, Secret Histories and the Politics of Publicity in Elizabethan England, Peter Lake, University Distinguished Professor of History and co-author (with Michael Questier) of The Trials of Margaret Clitherow:
While this sounds fascinating, it does give me pause: This book uses the lies, half-truths, and deceptions the government and its critics used against each other to present the truth about history! See the table of contents here.
Posted by Stephanie A. Mann at 12:30 AM