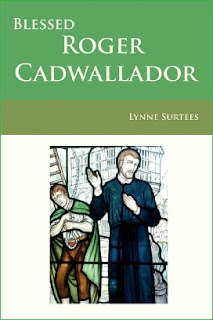 Gracewing has published another book about a martyr from the recusant era in England:

Roger Cadwallador was born at Stretton Sugwas near Hereford in 1568 and martyred in Leominster (Llanllieni) on 27 August 1610. He was beatified by Pope John Paul II in 1987. Cadwallador's story is an intensely dramatic one. A gentleman farmer's son, born into a family of devoted Catholics who 'kept their consciences in secret', he grew up in the Marches which he left to study abroad. First, he went to Rheims (where the English College from Douai was temporarily based) and then to the English College at Valladolid, where in 1593 he was ordained priest. In October of that year he returned to minister to his countrymen in England and Wales. For sixteen years Cadwallador worked as a bilingual Catholic priest, mainly in his native Herefordshire but also in the neighbouring counties of Monmouthshire and Worcestershire. He was known as a pious, prudent and zealous missioner, noted especially for his work among the poor. His education had developed his gifts for philosophy, theology and languages: a Greek scholar, he translated into English, from the original Greek, the fifth-century Historia Ecclesiastica of Theodoret, Bishop of Cyrus. This was published posthumously on the Continent in 1612. In Theodoret's account he found the beliefs and practices of the early church to be 'that, which we Catholikes hold' as against the claims of Church of England apologists. On Easter Sunday 1610, while saying Mass in the home of a Catholic widow, he was arrested on the orders of the Protestant bishop of Hereford. Condemned for being a priest, Cadwallador was drawn on a hurdle through the streets of Leominster, then stripped, hung, drawn and quartered. His head was displayed in the town centre and his quarters on the four main roads-one at the Bargates where St Ethelbert's Church now stands. Fully aware of the dangers which awaited young Catholic priests who returned to England to reclaim 'the souls of his dearest countrymen', Blessed Roger Cadwallador was spared none of the 'miseries' predicted for him, yet his attractive and cheerful character shines through it all. This is an inspirational and heroic story of a young man who gave his life for the priesthood. Lynne Surtees was born in Scarborough, Yorkshire, and though educated at the Convent school, began life as an Anglican. Married to a Church of England clergyman, she has four children (and four grandchildren). Now retired from nursing, she lives in Hereford, and, received into 'all the riches of the Catholic faith', is a parishioner of St Francis Xavier and an Oblate of Belmont Abbey.

Today is the 405th anniversary of his martyrdom, which Bishop Challoner described vividly:

The knot of the noose ended up under his chin--and the undersheriff started to get impatient with the time it was taking to execute Father Cadwallador because of the hangman's incompetence. The crowds at these executions knew how they were to be carried out and some even tried to "help" the priest die on the gibbet. They did not cheer when one of the sheriff's men raised the severed head of the martyr because they had witnessed the cruel incompetence of the execution and the Catholic priest's fortitude. Before he died he asked any Catholics in the crowd to pray the Pater Noster with him, secretly for their safety if they must.
Posted by Stephanie A. Mann at 1:00 AM