A Fifteenth Anniversary: St. Thomas More as Patron of Politicians 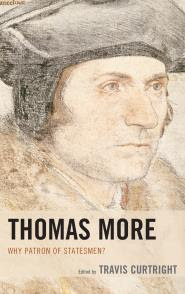 The year 2015 marks the fifteenth anniversary of Thomas More’s becoming Patron Saint of Statesmen and Politicians. Yet during these years no serious answer has been given by a community of scholars as to why More would be the choice of over 40,000 leaders from ninety-five countries. What were More’s guiding principles of leadership and in what ways might they remain applicable? This collection of essays addresses these questions by investigating More through his writings, his political actions, and in recent artistic depictions.

Chapter 7: Sir Thomas More and his Opposition to Henry VIII in 1533 (Travis Curtright)

Chapter 9: What Bolt Got Right and What Mantel Got Wrong (Louis Karlin)

Chapter 10: The Place of Sir Thomas More in Political Philosophy: A Reflection on “A Man for All Seasons.” (James V. Schall, S. J.)

Travis Curtright contributed an article to Crisis Magazine previewing his introduction, I presume, which I think reflects too much on Robert Bolt's heroic More:

As its fifteenth anniversary approaches in October, Pope John Paul II’s proclamation of More as Patron Saint of Statesmen remains widely ignored and often misunderstood. John Paul II’s understanding of More not only recapitulates Catholic social teaching; it also emphasizes many of the same key attributes that are highlighted in Robert Bolt’s famous play, A Man for all Seasons (1960).

Bolt’s More possesses an “adamantine sense of self” that derives from his “conscience.” This characterization of More comports with John Paul II’s longstanding account of conscience. As early as 1962, while auxiliary Bishop of Krakow, he wrote: “The conscience provides the basis for the definitive structure [of the self] and defines me as that unique and unrepeatable self or I.” Bolt’s distaste for Catholicism notwithstanding, he and the pope both stress the inseparability of selfhood and conscience.

Integrity emerges in those leaders who follow their conscience. The Vatican proclamation emphasizes More’s “unity of life,” his commitment to pursue sanctity through and within his legal and political work. Integrity in government leaders best serves the common good because, as Bolt’s More observes, “when statesmen forsake their own private conscience for the sake of their public duties … they lead their country by a short route to chaos.”

As John Paul II puts it, More’s “defense of the Church’s freedom from unwarranted interference by the State is at the same time a defense, in the primacy of conscience, of the individual’s freedom vis-à-vis political power.” The Church’s freedom, in other words, cannot be untethered from that of the individuals who uphold its teachings. More himself made this point in self-defense, invoking the Magna Carta Libertatum (1215)—and its doctrine that the Church shall be free—at his trial. So both More and John Paul II argue that no definition of the individual’s conscience can exclude God’s moral law or the Church that interprets and teaches it.

On this point, the pope’s treatment of More invokes the earlier encyclical Veritatis Splendor (1993). That document teaches that “human freedom and God’s law meet and are called to intersect” because “man’s free obedience to God’s law effectively implies that human reason and human will participate in God’s wisdom and providence.” Thus, the pope proposes conscience as the actualization of humanity’s highest faculties and the proper exercise of freedom as a participation in divine life, a point exemplified by More’s life and death.

Do John Paul II and Robert Bolt really paint a historically accurate image of More? Or are they merely making anachronistic impositions upon history?

This would be a fascinating study to read, due out next month (but very expensive!) This is a book for Inter Library Loan!
Posted by Stephanie A. Mann at 12:30 AM