Kings Over the Water and their Supporters' "Material Culture" 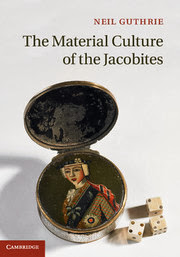 Coming soon from Cambridge University Press: The Material Culture of the Jacobites by Neil Guthrie:

The Jacobites, adherents of the exiled King James II of England and VII of Scotland and his descendants, continue to command attention long after the end of realistic Jacobite hopes down to the present. Extraordinarily, the promotion of the Jacobite cause and adherence to it were recorded in a rich and highly miscellaneous store of objects, including medals, portraits, pin-cushions, glassware and dice-boxes. Interdisciplinary and highly illustrated, this book combines legal and art history to survey the extensive material culture associated with Jacobites and Jacobitism. Neil Guthrie considers the attractions and the risks of making, distributing and possessing ‘things of danger’; their imagery and inscriptions; and their place in a variety of contexts in the seventeenth and eighteenth centuries. Finally, he explores the many complex reasons underlying the long-lasting fascination with the Jacobites.

The Cambridge University Press website contains several .pdfs of excerpts from the book, including the Table of Contents:

The National Gallery of Victoria in Melbourne, Australia has an exhibition now of one of the most common Jacobite objects: the glassware used to toast the true Kings of England:

So the Stuart supporters, or Jacobites, instituted, amongst other things, the practice of drinking toasts to their King “over the water” in glasses engraved with cryptic symbols which reflected their Stuart loyalties.

The NGV possesses an extensive and important collection of these rare glasses, many of them generous gifts from the Morgan family of Melbourne. Kings over the water will explore the fascinating hidden symbolism of these beautiful objects, created as part of a doomed political adventure whose tragic history continues to cast a romantic spell even today.

The exhibition site includes an essay on the glassware's manufacture and use, detailing the symbols etched in glass to represent the Stuart claimants:

Jacobite glasses were decorated with engraved cryptic symbols and mottos which, to those who understood their coded messages, spoke of the drinker’s loyalty to the Stuart dynasty. By far the most common symbol was the six-petalled white heraldic rose, an ancient emblem of the Stuarts. The white rose also had connotations of strict legitimacy. Its adoption by James III as his personal badge was particularly appropriate as rumours of his illegitimacy had been circulated by political enemies since his birth.

On its own, the white rose is believed to have stood for the exiled king. A rose bud to the right of the rose represented his heir apparent, Prince Charles Edward Stuart. A second rosebud, to the left of the rose, represented Prince Henry Benedict Stuart, Princes Charles’s younger brother. When there are two rosebuds, that representing Prince Charles is often larger and on the verge of opening.

And the Latin mottoes: