The King is Dead; Long Live the Queen 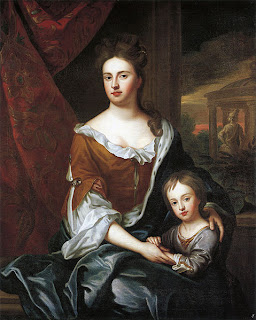 On March 8, 1702 (OS) William III died and his sister-in-law Anne succeeded him as Queen of England, Scotland, and Ireland. His wife Mary died in 1694 after they came to the throne when Parliament deposed James II in 1689. The transition and the fact that none of Anne's children had survived meant that she began her reign as the last Stuart monarch. Anne's marriage to Prince George of Denmark, a Lutheran, had resulted in 18 pregnancies, 13 miscarriages and still births, and four babies who died before they were two years old! Their only surviving child, William the Duke of Gloucester had died in 1700 when he was eleven years old. What a load of sorrows to bear!

In 1701, Parliament passed the Act of Settlement that bypassed the claims of Anne's half-brother, James Francis Edward Stuart, living in exile. Instead, it named the Electress Sophia of Hanover, James I's grand-daughter and Queen of Bohemia Elizabeth's youngest daughter.
In spite of being kind of a lame duck dynastic Queen, Anne proved to have a very eventful reign with the War of Spanish Secession (through 1714) and the Act of Union in 1706, creating Great Britain as major events. She was a loyal Anglican and approved of the Tory party, but with her reign the power and involvement of the Prime Minister and professional politicians increased, and the monarch became more of figurehead. As Queen, Anne revived the practice of the "King's/Queen's Touch", revealing a belief in healing connected to the Divine Right of Kings and God's providence in the succession -- Samuel Johnson who developed scrofula as a toddler was "touched" by Queen Anne on March 30, 1712. It did not clear up his condition, however, and he was left with scars from surgery. She was the last monarch in England to perform this ritual.
Posted by Stephanie A. Mann at 2:05 AM