The Age of Dryden 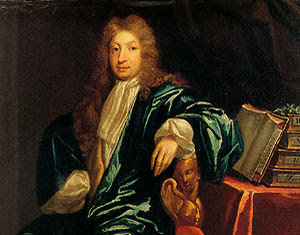 John Dryden, English Poet Laureate and Catholic convert, was born on August 9, 1631; he so dominated the Restoration era of literature that it is called "The Age of Dryden". He was a poet, playwright, critic, and translator, of course establishing the heroic couplet as the standard in poetry of the age.

His play, "All for Love: Or, the World Well Lost" was an attempt to revive Shakesperean tragedy, while his "Marriage a la Mode" signifies his dominance in Restoration Comedy, after the Puritan ban on the stage was lifted by Charles II.

His satiric poetry is occasional, as when he wrote "Absalom and Achitophel" as a commentary on the Exclusion crisis, the Popish Plot and the Monmouth Rebellion during Charles II's reign.

Around 1685, Dryden became a Catholic. In 1687, he published "The Hind and the Panther" a long poem describing his conversion. With the accession of William and Mary, Dryden refused to take the new Oaths of Allegiance and he lost his position as Poet Laureate and retired to work on translations of ancient Greek and Latin writers. He translated works of Horace, Juvenal, Ovid, Lucretius, Theocritus, and Virgil.

He died on May 1, 1700 and is buried in Westminster Abbey's Poet's Corner.

Now only English majors focusing on the literature of the British Isles would read Dryden--I haven't read him since I had to in Restoration lit courses, I admit. I studied Andrew Marvell and John Donne in courses too, and I do read their poetry for pleasure now. Luminarium offers many of his works on-line, perhaps we should sample them. "Alexander's Feast" or "A Song for St. Cecilia's Day" are shorter works to start with.
Posted by Stephanie A. Mann at 5:39 AM