Reginald Pole and the Fires of Faith 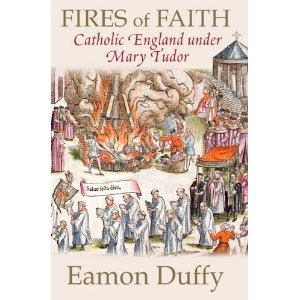 When I was in Oxford last summer--see my Picasa album on the Contact/Events tab of my website--I also enjoyed shopping at Blackwell's where I purchased Eamon Duffy's Fires of Faith: Catholic England under Mary Tudor before it was available in the USA. I read it in my "study bedroom" in Christ Church's Canterbury Quad and finished it on the flight home. My review of the book, posted here today apropos the vigil of the anniversary of Margaret Pole's execution, notes that although "Mary Tudor" is the name in the subtitle, the program of restoration and reform Duffy analyses was really the work of Reginald Cardinal Pole, the last Catholic Archbishop of Canterbury, and the martyr's son:

The brief reign of Mary I has hitherto been regarded as an anomaly in the steady progress of England in the Whig mythology of British history. It's considered a throwback to the Middle Ages, a dark time of superstition and tyranny, illuminated only by the fires of Smithfield and Oxford. Eamon Duffy sets out to revise this view, dealing with at least five major misconceptions about Catholic England under Mary I:

1). Papal Legate and Archbishop of Canterbury Reginald Pole was not that involved with the restoration of Catholicism, he did not agree with the policy of burnings, and did not encourage preaching enough.

Often this is held because Pole refused the assistance of the Jesuits in England. As Duffy notes, Pole had a different program of renewal planned from the Jesuit program. John Foxe actually minimized Pole's culpability in the heresy trials, but Pole was ultimately in charge of them. As Legate and Archbishop, Duffy demonstrates, Pole certainly encouraged preaching, preaching himself or preparing sermons for publication.

2). Pole and Mary ignored opportunities for propaganda against protestants, especially missing out on preaching or controlling the situation at the burning of heretics.

Duffy answers this charge by emphasizing how the new regime took advantage of Northumberland's speech on the scaffold before his execution. The leader of the plot to place Lady Jane Grey on the throne admitted his errors in continuing the protestant reformation under Edward VI and repented, having reverted to Catholicism. Duffy also notes that Pole was very much concerned with guiding popular opinion at the burnings, with preachers there to admonish both the heretics and any in the crowd who might share their errors.

3). The campaign of burnings did not work; the crowds shared the protestant cause of the victims in part because of their revulsion against the cruelty of the judges and the executions.

The judges did all they could to avoid condemning most laymen and women to the stake. The regime had to deal with the leaders of protestantism directly, although Duffy absolutely regrets the execution of Cranmer, surely an act of revenge by Mary for the sufferings he caused her and her mother. John Foxe's Book of Martyrs is the culprit here; a biased and untrustworthy volume, it is usually accepted on face value. For instance, Duffy notes that Latimer never told Ridley to "play the man"--Foxe is paraphrasing Polycarp, martyr of the early Church.

Duffy contends that the campaign to extirpate the protestant heresy from England was working. It only ended because Mary and Pole died. Our 21st century moral standards aside (based on a marvelous record of genocide, world wars, communist and totalitarian tyranny, abortion, etc), Duffy reminds us that the purpose of history is to understand that other country, the past, not to impose our standards upon it. If the purpose of history is the latter, Elizabeth I should be called "Bloody Bess" because torture, hanging, drawing and quartering are not humane ways of dealing with recusancy and dissent either.

4). All the regime had was this negative campaign to impose Catholicism on the people.

Duffy here answers with a culmination of facts: the regime did mount a preaching campaign, a catechetical campaign, a publishing program, and a reforming plan. This judgment is usually based on the hindsight that the reign lasted only five years. But Duffy reminds us that Mary and Pole did not know that they only had five years! They lived life as we do, in the present, ignorant of the future. They had a plan; death and Elizabeth cut its accomplishment short.

5). The restoration of Catholicism under Mary I was out-of-date, ignoring Counter-Reformation guidance of the Council of Trent.

This is backwards, contends Duffy: The restoration of Catholicism in England under Mary I set Counter-Reformation standards of the Council of Trent. Pole's efforts were models for Charles Borromeo, the great reforming Cardinal Archbishop of Milan. Marian England set the standards of seminary training, bishops in residence, the catechism of the Council of Trent, the use of tabernacles in churches, etc. Pole turned around the failure of the bishops under Henry VIII to uphold the unity of the Church and the primacy of the pope. Remember that only bishop, John Fisher, stood up against Henry's power grab. When Mary and Pole died and Elizabeth I succeeded, only one bishop submitted to her religious settlement. The rest declared their belief in transubstantiation, the Sacrifice of the Mass, the primacy of the pope and the unity of the Church--therefore they were removed from office and either went into exile or died in prison.

In summary: Mary and Reginald Pole left a legacy of brave men and women who remained true to their faith, setting up seminaries abroad and returning missionary priests to serve the recusant laity. The campaign against heresy was working in Marian England; the reform efforts of Pole and his bishops were following his plan of renewal. Duffy marshals documentary evidence and clear reasoning to establish their success and true legacy, contra the received opinion of Whiggish historians.

Duffy does not treat all aspects of Marian Catholicism, however. He does not address the material refurnishing of churches, the limited refoundation of monastic orders, or other administration type details. Well illustrated with excellent notes and bibliography: Highly recommended.
Posted by Stephanie A. Mann at 5:56 AM