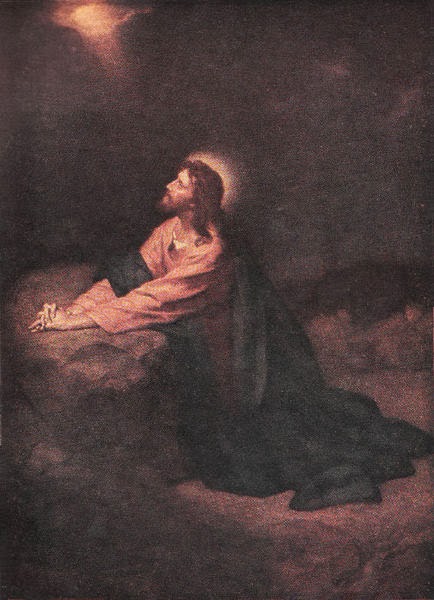 According to Seymour Baker House in the 29th volume of Renaissance and Reformation (2005), St. Thomas More wrote De Tristitia Christi/The Sadness of Christ as "A Martyr's Theology of Assent". You may access the .pdf of the article from that link. As House unfolds his thesis, he notes that More's exegesis of Jesus's Agony in the Garden serves as a preparation for martyrdom, if not for himself, for those who follow after him.

As I am reading The Sadness of Christ this Lent, I have been meditating on the long passage in which More considers distractions during prayer. He calls out their danger and he reflects on how incredibly inappropriate they are to the situation. More describes how we can dress up for Holy Mass--thinking we are honoring God through our attire--and then contradict that thought by cleaning our finger nails, picking our noses, thinking about many other things, and forgetting where we are entirely in the course of the Mass. He contrasts those distractions to the serious position we are in as suppliants to Almighty God, to whom we owe everything and on whom we depend for everything.

In one crucial passage, he asks the reader to imagine what would happen if a subject went before a mere human king and asked for pardon. Suppose the subject was accused--and was guilty of--treason and faced mortal death. Would he go before the monarch and while pleading for mercy, act distracted and unconcerned? Would he "yawn, stretch, sneeze, spit without giving it a thought, and belch up the fumes of [his] gluttony"? Of course not: he would be attentive, respect the office and person of the monarch, and pray for his mercy!

More then goes on to show that Jesus gave us a pattern of prayer to follow, culminating in the Agony of the Garden: praying intensely, body and soul, reverent and devoted to God His Father.

In Seymour Baker House's article on De Tristitia Christi (More wrote this Tower Work in Latin), he comments on the controversy over interpretation of Christ's Agony in the Garden vis-a-vis the mystery of His Person: True God and True Man, the Divine Second Person of the Trinity incarnate, with a human nature, human will (and Divine nature and Divine will). Did Jesus really fear the suffering and torture He faced and death on the cross?

I remember writing about how John Colet and Desderius Erasmus debated that mystery when I studied Erasmus as an undergraduate. Colet took the line of St. Jerome and other Fathers that this sorrow was not for His own death, but for the coming destruction of Jerusalem. Erasmus agreed with St. Cyril of Alexandria that this sorrow and fear was appropriate for Jesus to express, just as He endured the temptations of Satan in the dessert after praying and fasting for 40 days. He endured temptation without giving in, of course, just as He endured fear and sorrow and remained obedient to His Father's will.

Illustration: Christ in Gethsemane by Heinrich Hofmann.
Posted by Stephanie A. Mann at 12:30 AM