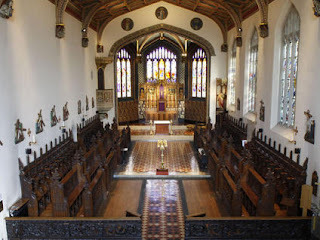 How I would love to spend a day at St. Mary's College Oscott, specifically in "The Recusant Library and Rare Books Collection"!

The Recusant Library at Oscott College, with over 12,000 books and pamphlets, and 400 manuscripts, holds works of Catholic interest published between c.1470 and c.1850. There are, additionally, a number of historical, scientific and medical works.

The collection developed initially from two sources. First, the Harvington Secular Clergy Library which was assembled at the recusancy centre of Harvington Hall, Worcestershire. Founded in 1696 by Lady Mary Yate for the use of her family chaplains, it became a library for the use of priests of the Midland District.

As might be expected, this collection is particularly strong in controversial, catechetical and devotional works relating to the Church in England. The pamphlet wars of the 1670s and 1680s are well-represented. Bishop Milner acquired the collection in 1810 for the use of the College.

Oscott, of course, is where Blessed John Henry Newman preached at the first Catholic synod after the restoration of the hierarchy, so I would want to visit the Pugin-designed chapel too:

The pulpit is associated with the most significant occasion at Oscott in its early decades, the first synod of the restored Catholic hierarchy in 1852. This occasion was marked by the striking sermon preached from this pulpit by John Henry Newman. Later published as 'The Second Spring', the sermon was a moving account of the recovery of English Catholicism from the dark days of penal times to its Victorian splendour. It came to characterise the expression of the restoration of Catholicism, and the very title 'The Second Spring' passed into common usage to describe Catholic life in Victorian England.
Posted by Stephanie A. Mann at 12:19 AM