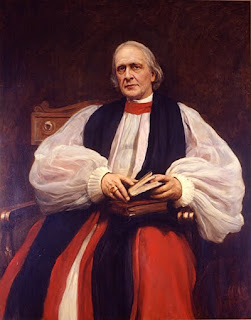 On this anniversary of the death of Edward White Benson, Archbishop of Canterbury, on October 11, 1896, herewith some notes about his family and his household. He married Mary Sidgwick on June 23, 1859 and they had six children, none of whom married. Three of their sons became authors: E.F. Benson, A.C. Benson, and Robert Hugh Benson, who first became a Church of England minister and then converted to Catholicism, became a Catholic priest and wrote several historical novels and other fiction. Daughter Margaret was also an author.

A recent biography of Mary Sidgwick Benson, As Good as God, as Clever as the Devil: The Impossible Life of Mary Benson by Rodney Bolt has received some good reviews in the British press, including this one from The Independent:

Mary ("Minnie") Sidgwick, the subject of Rodney Bolt's biography, was a mere 11 years old when her 23-year-old undergraduate cousin Edward Benson first took a shine to her. Within a year, despite a certain amount of maternal anxiety, there was a semi-official betrothal, whereupon Edward, whose punctiliousness in the matter of Minnie's intellectual development was painful to behold, set about moulding his intended's character.

They were married in 1859, the bride a tender 18. Looking back on her continental honeymoon from the vantage point of middle age, Mary noted: "Wedding night – Folkstone [sic] – crossing – oh my heart sank – I daren't let it... misery – knowing that I felt nothing of what people ought to feel... How I cried at Paris! Poor lonely child, having lived in the present only... The nights! I can't think how I lived."

Harrowing as all this is, it would be a mistake to mark Mrs Benson down as a sacrificial victim at the altar of the Victorian child bride. She admired and sympathised with her exacting husband ("He restrained his passionate nature for seven years, and then got me!"), pined to assist him with his great work but was frightened of his temper, as were the children. The hero of Arthur's first novel writes the words "I hate Papa" on a piece of paper and buries it in the garden. Later she embarked on a series of intense but essentially decorous female friendships, one of them with Dame Ethel Smyth, the advocate of Suffragism.

Bolt's technique in this panorama of Mary's life and times is to construct a running commentary made up not only of material from the Benson archive, Arthur's journals and Fred's autobiographical novels, but extracts from fiction and diaries. Mary's honeymoon, for example, is trailed by Amelia Sedley's wedding night from Vanity Fair and Dorothea Brooke's dusty dealings with Mr Casaubon.

Archbishop Benson dropped dead attending Gladstone's parish church at Hawarden. His relict survived a further 22 years, sustained by a relationship with Lucy Tait, herself an archbishop's daughter, who made a willing replacement in the marital bed. As Good a Good, as Clever as the Devil is an example of an accelerating trend in Victorian biography, the book that seeks to coax a hitherto neglected wife from the shadows cast by her domineering husband. But whereas Caroline Dickens – to make the most obvious comparison - is merely a representative mid-Victorian home-maker, Mary Benson is something else altogether: a woman whose personality shines off the page, and who seems at least as much an influence on her multi-talented children as croziered Cantuar. My only complaint about Rodney Bolt's consistently absorbing study is that it isn't twice as long.

As The Daily Mail reminds us: "Benson is best remembered for devising the Festival of Nine Lessons and Carols while Bishop of Truro. It was first used in Truro Cathedral on Christmas Eve, 1880. Now used around the world, every year it is broadcast by the BBC from King's College, Cambridge."
Posted by Stephanie A. Mann at 2:17 AM