Cromwell's Bonfire and Our Lady of Walsingham 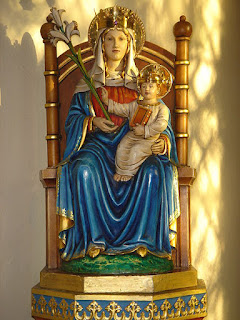 Did the original statue of Our Lady of Walsingham survive Thomas Cromwell's bonfire?

There's a story in The Catholic Herald suggesting that a statue identified as "Virgin and Child" and also called the  Langham Virgin in the Victoria and Albert Museum could be the statue of Our Lady of Walsingham.

The co-author of that article, Dr. Francis Young, writes on his own blog:

We are fortunate to have a fairly detailed image of this statue, which was depicted on the seal of Walsingham Priory – although we have no way of knowing how accurate the seal’s depiction was. What can be said, however, is that what remains of the Langham Madonna is strikingly similar to the seal image. This similarity on its own, of course, is not enough to show that the Langham statue is Our Lady of Walsingham – it could be a copy of the famous statue, or just an image of a similar type from a time when portrayals of the Virgin enthroned were popular in English religious art. There are, however, good reasons to believe the Langham statue could be the famous Walsingham image – partly because it can now be shown that the provenance of the Langham Madonna was inaccurately recorded when the statue was purchased by the V&A, and partly because the statue bears physical signs of traits apparently unique to the image of Our Lady of Walsingham. The details of these arguments can be found in the original article.

Young refers to the "provenance" of the statue being inaccurately recorded: instead of what the V&A states ("Said to have come from Langham church, near Colchester, Essex"), it may have come from the Langham church near Walsingham, Norfolk. As he and Father Michael Rear wrote in The Catholic Herald article, this is not a new idea:

Confirmation of the likely error comes in a letter to the Tablet of July 25, 1931 from the Anglican priest Henry Joy Fynes-Clinton:


Recently there was discovered in an old house near Walsingham, and sold, an old wooden carved figure apparently of the 12th century which almost without any doubt is a copy of the Walsingham Image, or even, may we think? the original, saved perhaps as other relics and holy things, by means of substitution being made for the purposes of satisfying the desecrators.

Langham in Norfolk is only six miles from Walsingham. The vicar of Langham, John Grigby, was arrested in 1537 for his part in the “Walsingham Conspiracy” of Catholics who resisted the destruction of the Shrine. Langham Hall was the home of the Calthorpe family, who became notable recusants, and was inherited in 1555 by the Catholic Rookwood family of Euston, Suffolk. Although the present Langham Hall dates only from the 1820s, Langham Hall in Essex is not much older. It was built between 1756 and 1772. 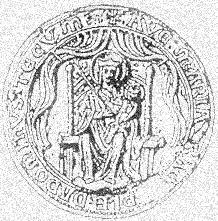 British History Online provides some details about the "Walsingham Conspiracy" of 1537 although John Grigby is not mentioned:

There is, however, an entry for the pardon John Grigby received later in 1537, in BHO's Letters and Papers of Henry VIII:

As the Lament for Walsingham ends:

Sin is where Our Lady sat,
Heaven is turned to hell,
Satan sits where Our Lord did sway
Walsingham, O farewell!

But with the restoration of the shrine in the 20th century and the Dowry Tour concluding with the rededication of England as the Dowry of Mary in 2020--and now the possibility that the original statute of Our Lady of Walsingham survived--the victorious gloatings of Latimer, Husee, and Melancthon ring hollow:

Bishop Latimer wrote a jocular letter to Cromwell in June, 1538, suggesting the burning of the image of the virgin of Walsingham and others: 'they would make a joly mustere in Smythfeld.' (fn. 56) John Husee, writing to Lord Lisle, on 18 June, also attempted to be witty on the same subject:


This day our late lady of Walsingham was brought to Lambithe (Lambeth), where was both my Lord Chancellor and my Lord Privy Seal with many virtuous prelates, but there was offered neither oblation nor candle. What shall become of her is not determined. (fn. 57)

Among the Lady Day accounts of 1538 the usual payments were made for the king's candle, and to the king's priest who sang before Our Lady at Walsingham. But when the Michaelmas payments came round the entry runs:


'For the king's candle before Our Lady of Walsingham, and to the prior there for his salary, nil.' (fn. 59)

Our Lady of Walsingham, pray for us!

Holy Martyrs of the English Reformation, pray for us!
Stephanie A. Mann at 12:30 AM
Share